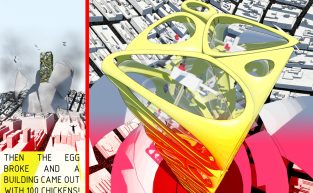 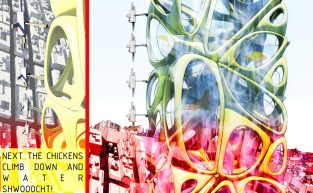 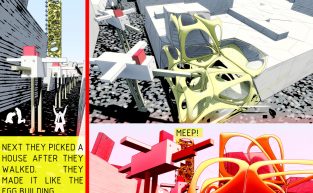 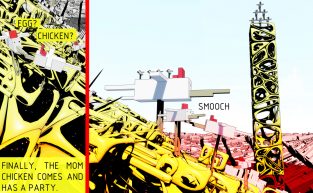 “One day an egg was falling from the sky.  It made the earth fall apart.

Then the egg broke and a building came out with 100 chickens!

Next the chickens climb down and water shwoocht!

Next they picked a house after they walked.  They made it like the egg building.

Finally, the mom chicken comes and has a party.

That’s at least how the space alien chickens said it would go down.  They were kind enough to send us humans an email the day of the invasion and in English too.

Like most over-thinking under-achievers I decided I would spend my last days in a watering hole drinking top shelf Scotch.  After all, there was a good chance the house rent wouldn’t be due next month.

So I enter the dive bar –

Emergence [in architecture design] – the belief that abstract concepts of form and function resulting from material computations that are generated outside the human consciousness by non-sentient agency should be found meaningful, investigated, and mimicked in order to produce [find] a better architecture.

“Give me your finest scotch, the older the better mister bartender!” –  me

” Sir, you are aware we are being invaded by an alien chicken species and they are turning all buildings into what appear to be a complex chicken wire mesh of blob like voronoi structures, it’s on every channel!” – Bartender

“How do they know it’s voronoi? What is voronoi? Georgy Voronoy!?!” – me

“A mathematical pattern I suppose. They say it’s a sign of higher intelligence given the complex pattern making….” – Bartender

“Who is this they? The main stream media?” – as I down the entire short glass – “Give me another on the rocks!….I’ll show you complex pattern making, these ‘they’ people, journalists I suppose, do a google search, browse some internet and then formulate a narrative that attracts their  audience.  If you like this Scotch you will probably golf here and here and that’s why you want to buy this gun to shoot the Chickens with!’ – me

“Here is another Scotch….do a shot with me so I can figure out what you’re saying.” – Bartender

“Yeah that will help…. What is the difference between a random rock formation on an island and the Giant’s Causeway?” – me

“Not following, do like the Giant’s Causeway though…. the polygons of rock I suppose versus random rock formations.” – Bartender

“Who told you what a polygon is?  Why is that any more defined than the ice cube in my glass which needs more Scotch!” – me

“I guess you wake up in the morning and you just know somethings make sense and others don’t and you go about your way, not sure how else you could live?” – Bartender

“Blasphemy! This ice cube is perfection, it has 119 sides and its form must be divine because I see this abstraction in all of the world!  The chickens, who are clearly just here to party, you think they see Georgy Voronoy in everything?” – me

“Patterns, come on man, who defined this never before known term based on somehow provable relations of visual experience over time? How come you don’t see my ice cube in all things nature and humanity? Are you dense?!? 119 sides man, 119….” – me

“That was the last of my 18 year old scotch, sir, slow down, the chicken invasion is stressing us all out.  You don’t think voro-noise is divine?.” – Bartender

“You don’t find the fact the higher beings, granted they are chickens, invade our planet and make everything they touch turn into these voronoi patterns divine?” – Bartender

“How do you know the chickens are even conscious of this pattern?” – me

I leave the dive bar and go looking for an art gallery, maybe some abstract art at the end of the world will make this chicken invasion less stressful.

As I step out into the street: cars on fire, horns blaring, sirens, people running around like….well, like chickens with their heads are cut-off.

Anyway, I’m not really sure it’s the end of the world, but given that planet Earth has never been invaded by voronoi pattern spreading chickens, there’s a good chance.

Does emergence occur on its own or do we become emotionally attached to patterns of abstractions that occur naturally in the environment exclusive of our existence?

If a tree falls in the forest and no one is around to hear it, did it make a noise?

You can place microphones throughout the forest and record the sounds the forest makes.  We may decide if the recorded noise is different than standard forest silence, but – didn’t the noise emerge without us being present?

I arrive at the Art Gallery of Abstract art, surely the crowd will be better than the dive bar tender.

“Voronoi is not divine! Its trendy!” – angry anti-believer

There appeared to be some really strong smelling blue cheese available at the server’s table, I sprinted to the table.

“How do you feel about chickens changing your entire world into voronoi blobs?” – me

“They say it’s a sign of divinity.  My family kills chickens the right way, after this art show, my family and I are going to sacrifice a few chickens to these higher-beings.  I just have to finish working tonight so I can pay rent, you know.” – server

That must be how emergence occurs.  Many humans, majority of society, agree upon abstractions from nature as signs of divinity? But where do or how do abstractions happen?

Immanuel Kant probably is right, it’s all a priori, categorical imperatives, in other words you are pre-disposed to find patterns in the environment and when you do find those patterns – they synch as truth because your pre-disposition matches what your senses perceive.

The server was explaining something.  I wasn’t paying any attention.

I quickly dodged the angry anti-believers and sped walked for the canvas that was painted by scraping dining silverware across it with paint.

The anti-believers were angry, because none of this emerging behavior of reality could be dumped off on an unknown higher being and it matched none of their formulated narratives of abstractions.  Buildings should be square they say, these chicken structures were not.

By the way – Unknowns are Blackholes for everything possibly true because no one can explain them. The premise for any super-truth!

Could these voronoi chicken structures be parametric?  That would bring creedance to their existence, the black turtle-necking archispeakers would probably believe that.

The anti-believing archispeakers had to take the chickens and the voronoi patterns at face value and through science’s interpretation, human understanding with regard to the philosophy of nature, explain it somehow; eventually, before they die or the Scotch runs out – or just accept Parametricsm.  Because Parametricism will explain everything.

As Ludwig Feuerbach would put it, channeled years later by those Aussie rockers AC/DC – Who made who?

If Chicken Aliens invaded and smooched at a Chicken Momma’s party what thoughts might you have?

I tore the silverware scrape painting off the wall and ran out the door.  The anti-believers were so distracted by their anti-belief with reality – no one noticed.

No one ran after me.

We call this a paradigm shift.

Abstraction [in architecture design] – is the extraction of concepts and ideas from reality, withdrawn and detached, that can stand on their own and be their reason for existing in the first place (raison D’etre).  The abstraction’s meaning is conjured up by relating these abstractions into a narrative and then re-applied practically to the physical environment.

For instance, finding drawings habitable and not the space they represent.  To which Henri LeFebvre says no.

Emergence or Abstraction? Which came first?